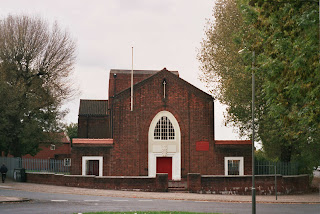 At first glance this brick built church sitting on the edge of a busy traffic roundabout in Norris Green looks a little lost. It is hardly surprising out of the tens of thousands of cars that pass every day none find it worth stopping.

On closer inspection however a pleasant surprise awaits.

It is Grade II* listing a higher ranking in listing terms than many buildings held in the highest architectural regard within the City Centre.

The Architect was Bernard A. Miller B.Arch., A.R.I.B.A who trained at the Liverpool School of Architecture. 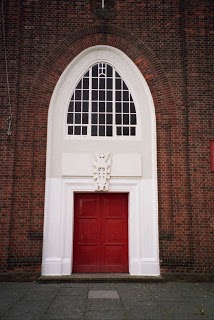 He was renowned for his progressive church design. He also taught at Liverpool.

Originally part of a Liverpool Corporation housing scheme for Norris Green the Liverpool School was employed to bring new building methods and cost effective pricing.
From its outset it was to be part of the community and with the children of the Diocese raising a substantial part of its costs some £3,000. It is correct that it was and is known locally as The Children’s Church. The names of many of those children are buried beneath stones in the courtyard between the Church and Church hall.

The planning and detail reflects the input of this community spirit and a Parish hall and school are connected to the church by a beautiful cloister garden.
The Church follows the traditional cruciform plan but was said in various articles at its time of build to be highly original. I am not sure how much of this was down to cost or a new radical approach required in 1933.
The architect Robert Atkinson had successfully employed the use of a steel frame as early as 1924 at St Catherine’s in Acton who experimented along with a stock brick carcass.

Inside Millers original compliment was the use of parabolic arches of steel frame and fibrous plaster. These leap from eight feet above floor level intersected by parabolic windows. The steel ribs project, dividing nave and sanctuary into bays.

This form does not create a true parabola as the crown is curved and the sides faceted which aid the acoustics. 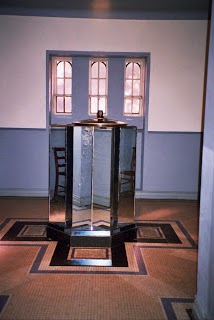 This creates a light of air and spaciousness even though the height from floor to crown is only 28ft. This is also to be noted as the width of the nave.

No provision is made for processions; this is thought to be in the Protestant ideal.

Outside the lovely cloisters have a Portland stone pulpit sculpted by Mr Bainbridge Copnall.
External elevations show windows are metal casements some stone dressings but predominantly the church is built of Reading brick.

Original colour scheme of the interior was of Oyster grey; red and deep blue with gilded stars this has been changed in the 1960s.

From the eye of a carpenter the attention to detail is subtle but evident in its simplicity. The use of laminated ply and stainless steel. The Altar is modelled in Keene’s cement and fibrous plaster, with a Hopton wood stone base. The centre panel of the Raredos was a violet blue. The Alter cross is of stainless steel with an emerald green mounting. This was a radical and entertaining colour palette for the time.


The side chapel is dramatically placed below the level of the main floor and was originally painted in violet blue. 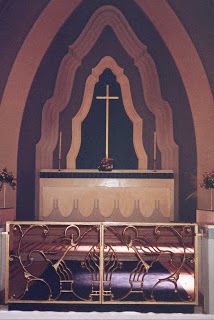 Lighting in the chancel is concealed and clever lighting has also been employed to throw light on the ceilings. Some of the light fittings almost look industrial compared to the French influence on the iron railings but blend well with the simple plywood chairs and fittings throughout.

The font has been unkindly described as looking more ‘ice cream parlour’ than our father being decorated in copper and blue mirror, which is applied to a star shaped design.

I think this is a wonderful church, quite undiscovered for its architectural merits except by a few.

It had been suggested in the 70s that it would be easier to knock the church down and convert the church hall into a dual-purpose building.


The then 30’s Society now The “20th Century Society helped in its listing, and grants from English heritage helped to bring it up to a standard that should help sustain its place in highlighting a new and exiting era for architects. The inter-war years. Modernism with all its forms and hybrids touched us all in different ways. The fabric of the building now seems in a good condition and we have to thank the parishioners who without their effort a wonderful piece of our not too distant past would not have a new lease of life.

Posted by Wayne Colquhoun at 11:46