Its been a while since they filmed in the shop for the BBC's Antique Road Trip but it looks like its going out on BBC1 the week starting Monday 4th February. 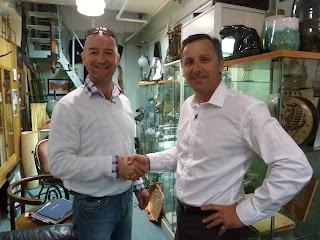 I had just come back from a buying trip in France, my own antique road trip and the BBC dropped in again, to do some more filming. This time for The Antique Road Trip.
As I had been in France the afternoon before they came into film, it was about 3 a.m in the morning that I got back to the shop and offloaded all my purchases.
It had been a horrendous drive through the blistering rain and as they were coming early morning I slept in the shop waking up with a head like a burst couch I shuffled off to the washroom to try and throw some gel on my hair and try and make an effort. Lets make it look like I am making it a 40's style I thought trying to avert a bad hair day on the very day they will be filming for national TV.
. A good friend of mine called in to see how the trip had gone. Not bad I said maybe 80 new pieces of stock.
"When are the BBC coming in" he asked
"Any time now, they are running a bit late"
You are not going on the telly with you hair like that are you"
I could have killed him.
"Yes I am actually"
Realising he said oh it looks good "Yes, I said, good job I am pretty confident isn't it" I was very tired and in walks David bright and breezy having stayed in a comfy hotel around the corner, there is no justice I thought.
The format is pretty well recorded David buys a few bits from me that he then attempts to sell on at a local auction, which unfortunately may be Cato Crane's, and hopefully he makes a profit.

He is a dealer, of course, so he will be as hard a negotiator as the rest of us are. I was as helpful as I could be, but we seemed to get along well enough, I hope he makes a profit on the items he bought from me an goes on to win the challenge.  My trip to France meant I had  lots of new things in the shop www.classicartdeco.co.uk  and David was genuinely impressed by the shop. Have look by clicking on the link. Last time Eric Knowles was in filming for the same programme they cut it down so I am not sure how they will edit it but I can think of worst things to do.


http://www.bbc.co.uk/i/b01qks76/  here is a link to the programme you may have to scroll around to watch the whole programme from the start. Liverpool is about 18 minutes in to the programme.
Posted by Wayne Colquhoun at 12:07