Celebrity Antique Roadtrip Drop In To My Shop To Film......With Edwina Curry.

I decided to open the shop Saturday last 25th May, as there was a massive commemoration to honour the part Liverpool played in the Battle of the Atlantic.


So I get in and put my lights on and a board out in Water Street and my mobile rings.
“Oh hi it’s the BBC we will be with you just after eleven”
“What for” I asked as I didn’t have a clue
“Antique Road Trip”

“Oh right” I said as I realised I didn’t even have a shave and I realised I wasn’t looking my best. Surely they could have let me know and I would have made an effort, but there you go we can manage this lack of oversight that makes the usual lack of planning that the BBC undertake, look efficient.

I found a razor and s destubbled my chin and had a little tidy around. It wasn’t bad and its something I can take care of. It was after 12 and I sent a text to check I have the right day receiving the usual we are a little bit delayed.
I had been going to pen a letter to the Antique Trade gazette complaining how the glut of programmes are not helping the trade when the phone rang some weeks ago.


“Hi Wayne its Celebrity Antique Road Trip we would like to film in your shop”
“Where do you want me?” I said ashamedly capitulating to the power of the media.

Now here I am standing in front of the washroom mirror with a head like a burst couch and a hangover after a late night in Alma De Cuba in Seal Street regretting it.
“Who is the celebrity? “ I had asked and the subject was surprisingly well dodged by Sandy on the other end of my mobile.
It was manic in the streets so I got them into the private garage that was half empty below the building and I went to greet them.

I recognise that face I thought as a woman walked towards me. 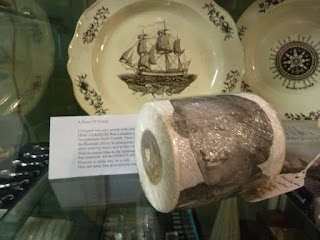 “Bloody ‘ell its Edwina Curry” I said under my breath as I greeted them all welcoming them to India Buildings.
Trust my flippin’ luck I thought she must be one of the most hated politicians in Liverpool.
Most Liverpudlians have abandoned her saying she was from Crosby and that’s not really Liverpool. I will just have to get on with it I thought, but I am in for it when this programme goes out.

To commemorate the passing of Lady Thatcher I had a recent antique in the window to show my feelings towards her.
I had been saving it for a special occassion.
Was this now, not looking in good taste or are we going to get into a bit of a ding-dong. 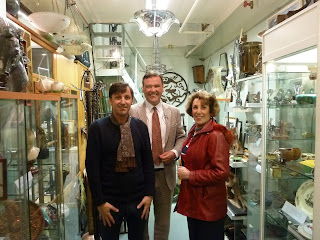 She was quite nice really I was surprised on how pleasant she was as they set up the gear and off we went.

They started looking around in cabinets and behind things and in no time at all “Whats this Wayne,” she said

I couldn’t believe it she had found an old 50’s corset that I had found in the bottom drawer of a cabinet, a Maccassar Ebony buffet and I had forgotten about it.
Trust her, no one has even noticed it before and off she went modelling it while I am standing there thinking I wish I had sent that letter in to the gazzette.


Then she tries it next to me for size to see if it fits.
“I can’t believe I have just let you do that,” I said. Thinking how am I going to retrieve my reputation after this.
Anyway in for a penny I threw in a pair of flapper girl garters that she loved and we were off, here is a cigarette holder while she pretended to blow smoke in my face I just stood there flabbergasted.
I don’t usually do cringe but I must have looked like I had been slapped.

Her and the BBC dealer who was a nice bloke doing his best to control her went off round the shop and we managed to calm her down. 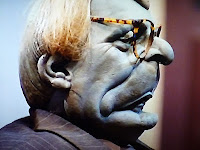 It is a good job I had just moved house splitting with my ex-girlfriends because I wouldn’t be getting in tonight after having Egwina in the shop.
Then to make it worse she is kissing me goodbye on camera.
My god those same lips have been all over John Major I thought as I tried to keep a straight face.
The things you have to do for publicity.


Next thing I am having my photo taken with her and she is going to tweet me will I ever live this down. 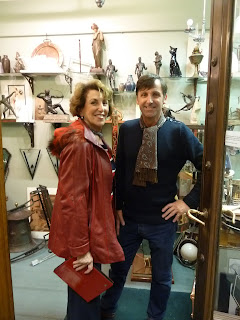 I think I will stay closed from now on of a Saturday.
I am going to be in a lot of trouble when this goes out which I think is September.

Posted by Wayne Colquhoun at 13:33