George Ehrlich Bronze-Piece of the Week. 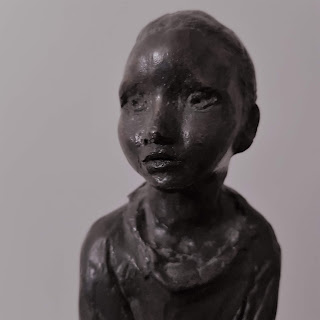 He is well known for his delicate and tender studies of children. His bronzes are mainly studies of adolescents or animals, though he also made a number of portrait busts and reliefs.

He was engaged for many public commissions. 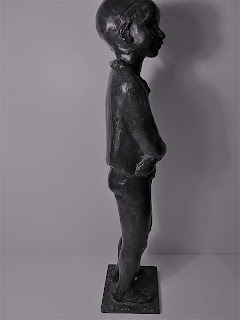 This work is 38cm high and is a study of a young child. 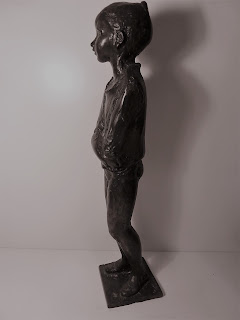 Arms crossed across the torso they are wearing a loose fitting tunic with a wide kneckline and is signed in the bronze and numbered in latin numerals, I/VI which intimates this is part of a series of cast bronzes.
I was told it was purchased directly from the artist.
The face has a real sense of feeling even a look of nonsulent melancholy.
The child seems to be wearing a cap. But then again it could be a bobbin tied in the hair. The child seems to be bound in the pose not able to motion. Gazing out in sadness. Though I feel there is a deeper underlying meaning to the chosen pose, with its Pierrot-esque feel, that the artist wished to convey.
George Ehrlich (I always have to check that spelling) came to Britain in 1937 presumably to escape the Nazis. He had served in the Austrian army during WWI.
George Ehrlich (1897-1966)
Born in Vienna Austria in 1897. 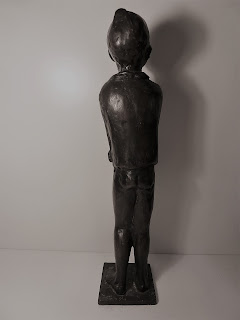 Studied at Kunstgewerbeschule, the Vienna School of Arts and Crafts under the architect Strnad, 1912-15.


He served in the Austrian Army during the First World War. He initially trained as a draughtsman though would study the art of etching.
First one-man exhibition at the Galerie Hans Goltz, Neue Kunst, Munich, 1920. where he lived 1919-21.
He then moved to Berlin 1921 where he lived until 1923.
He began to make sculpture in 1926. First public commission Vienna 1928
Married Bettina Bauer, painter, 1930. His sculpture included in the Austrian pavilion at the Venice Biennale 1932, 1934, 1936 and again 1958.
He then moved back to Vienna where he lived until 1937. 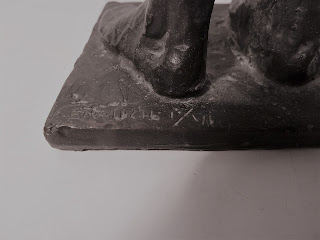 Came to London as a refugee in 1937 and took British nationality. Awarded gold medal at Paris World Exhibition 1937.
Became naturalised British citizen in 1947.
His life-size bronze Bull for Municipality of Vienna was constructed 1959-60.
Awarded the Sculpture Prize of the City of Vienna 1961; elected ARA 1962.

The Arts Council organised a solo exhibition in 1964 which opened at the Aldeburgh Festival in June 1960 Then onto Garratt Green School, Wandsworth, London 1961.
Born in Vienna Austria in 1897.
Lived from 1963 in Italy and Austria, and died in Lucerne.

He is often associated with Alexander Archipenko   Read More Here

Email ThisBlogThis!Share to TwitterShare to FacebookShare to Pinterest
Labels: George Ehrlich, Piece of the Week.