Keller and Guerin Luneville Vase-Piece of the Week.


I have had this beautiful pretty little vase for over a decade.Many have tried to prise it away from me but up to now I have not given in to the lure of....money. I keep thinking where am I going to find another one. 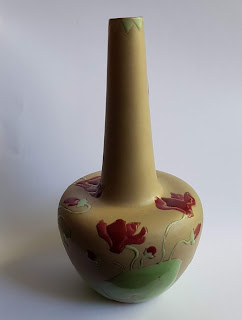 It is decorated so simply with floral decoration applied in enamel over a earthenware base. It looks like the flowers are swaying in the wind.
Its only 17cm high, and as a potter I can tell that the thrower has just patted the rim down creating a ever so delicately placed dimple around the neck of the piece where it becomes more rotund, that just gives it a little something extra. 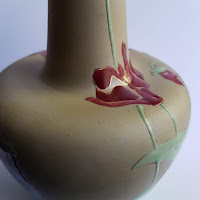 Now even after all this time and without too much research I have to admit I don't know who the exact decorator is. I would love to think its a Ernest Bussiere piece but it could be Louis Majorelle or Lachenal. What I do know is its a little gem.
Signed K G Luneville that is the mark for Keller and Guerin. In 1728 Jacques Chambrette established the first earthenware factory in Lorraine, in Lunéville besides the river Meuse, not far from Vezouse.
He formulated a new type of earthenware called "terre de Lorraine" in 1748 based on the study of English potteries.
He had great economic and artistic success. 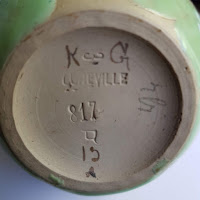 The factory was awarded the status of Manufacture Royale de Fayence by the Ducs of Lorraine in 1749.
The Lunéville manufacture was ti rival the expanding English and German ceramics centres and Chambrette managed to successfully export his wares to Italy, Germany, Poland, Switzerland and even The Netherlands.
In 1786 Sébastien Keller bought Luneville from the Chambrette family following the bankruptcy of the pottery manufacturer in 1785. For the next 137 years, the Keller family controlled the company. In 1832, Sébastien Keller's son aligned with his brother-in-law Guérin to give birth to the mark K&G (or KG) from the names Keller and Guérin and during the following century, Lunéville was the seat of "Keller and Guérin" (Société KG).
Between 1700 and 1800 several faience manufacturers installed their companies in a tight network in Lorraine. The factories produced everyday utilitarian and decorative objects.
Since silver dinner services were prohibited by the king (who used the taxing of such objects to finance his wars), faience manufacturers were able to sell wares more easily.
The artisans were inspired by their surroundings; Subjects were decorated with naturalistic styles, faience was decorated with flowers, insects, real and fictitious animals and exotic figures. They produced faience dogs, which were placed in the halls of houses ( the French have an expression "to stare at each other like faience dogs").
Later on Chinese decorations, introduced by Jesuits who brought back examples from their often dangerous missions. Jacques Chambrette, who suffered from the high taxes that were imposed on him in the ducal region that was controlled on behalf of the King of France, coveted the episcopal area, which was connected to France, but where the influences of Louis XIV were much less smothering.
In 1758, Jacques Chambrette started a second faience factory in Saint-Clément, which lies in the Diocese of the Bishop of Metz. In the 19th century the originally German family Keller, soon allied with Guérin. This gave new life to the factory by industrialising it. 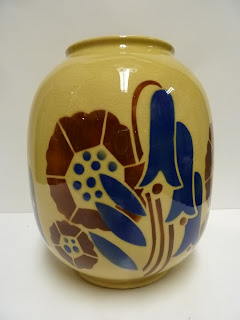 This was an era in which Lunéville and its surroundings provided very skillful workers.
The area around the faience factory, under patronage of Sainte Anne, developed.
In 1900, there were around 1,100 employees. The factory's products had a worldwide reputation and participated successfully in various fields of art and industrial exhibitions.
During the design period we know as Art Nouveau Keller and Guirin employed some of the most gifted designers Louis Majorelle and Ernest Bussiere were to create some of the finest designs. Lachenal would add to the design base of the company.
In 1922 Édouard Fenal, originally from Pexonne and Badonviller, bought the factories of Lunéville and Saint-Clément, so employment was guaranteed in Lunéville and Saint-Clément. 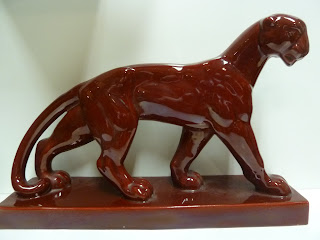 New designers were brought in to cater for the new wealth that was around and the new style that we now know as art deco rushed in with its geometric lines.
Mougin Brothers would help to bring the whole area into a new style.
The Second World War marked a recession.
The name Geo Conde is often seen on wares.
St Clement produced huge quantities of crackle glazed animaliar following the French tradition of sculpting the animal form that went back centuries.
The production of these in ceramic made them more affordable. Some of these animals were of varying quality some having slightly strange colour combinations of deep reds and blues that are highly collectible today. 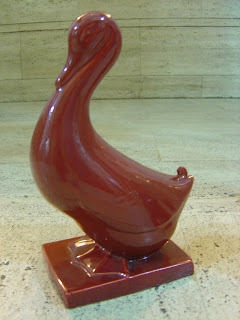 In 1979 a new group was further developed by buying out the Sarreguemines ceramics complex. Édouard's son, Gilbert, was in charge of the group which also comprises Salins, Vitry-le-François and Digoin.
The Lunéville production stops in 1981.
Only the factory of Saint-Clément is still operational by1999.

In the renovated buildings nowadays small and medium sized companies are still working.

Posted by Wayne Colquhoun at 14:42

Email ThisBlogThis!Share to TwitterShare to FacebookShare to Pinterest
Labels: Art Deco, France, Piece of the Week.