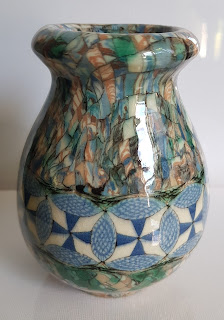 Gerbino was born into a Sicilian pottery family, he started learning his craft at an early age. He left for Vallauris, France, where he worked as a potter under Clément Massier.

In 1919, after a spell in Algiers then in Uzès, near Nîmes, then he returned to Vallauris. Where he was to stay.

The vase on the left is 12cm high. 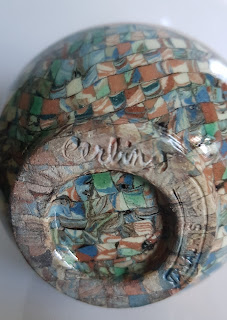 He was heavily influenced by Japanese Nerikomi pottery known as Neriage. The work he produced involves laminating different coloured clays to produce blends of colour that seem to swirl yet was uniform.

When you then cut across the grain, of the blended clay, you get beautiful repeated patterns.

The making of a stick of rock come to mind.

The detail is amazing.

Jean Gerbino devoted 15 years of his life to developing this unique process, a combination of mosaic and Neriage.

In 1931, it won him the Paris Concours Lépine prize. Many other awards followed.

The vase below is 9cm high. 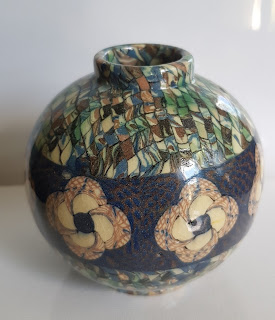 His work is unique in Europe to my mind and is as timeless as the Venetian masters of glass who weaved their millefiori rods into beautiful artistic creations.

It must have taken a great amount of time to produce his work.

Firstly in the concept of getting all the different clay to merge in the kiln and then in the designs, which have an art deco inspiration though post war and are of their time.

The colours reflect the light in his part of the world and echo the provincial colours of the pottery creations that made Vallauris a draw for ceramicists.

I have four vases ranging from 9cm to 12 cm in height.

I am amazed by them.

Posted by Wayne Colquhoun at 10:58