Art Deco Statue-Piece of the Week 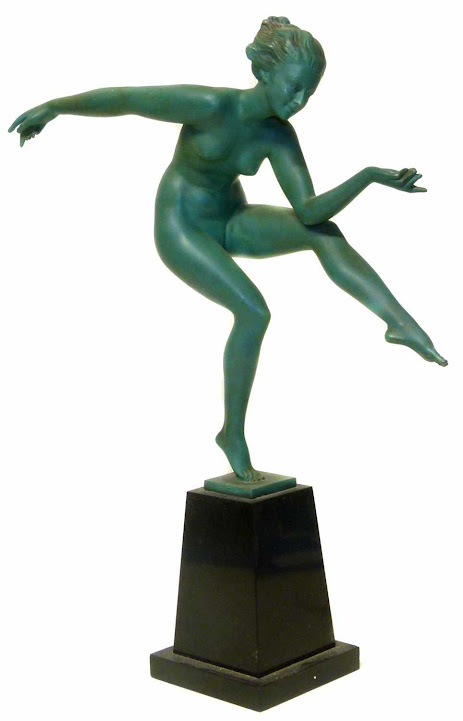 Marcel Bouraine (1886-1948) is a well known name in the style we know now as Art Deco. The term Art Deco is an abreviation first seen in the 1960's taken from the name of L'Expostion Art Decoratif et Industrial Moderne in 1925. In Paris. This is the now accepted date when this new modern style was brought to the world in any sufficient quantity as to make a substantial difference. I have had some really strong bronze studies by this artist.

He also had a pseudonym. I have also had several Art Deco statues signed Derenne mainly in spelter some have had slate bases other had had marble.

I have built several collection both for myself and for my several of my clients over the years and they always seem to include a sculpture by Bouraine.

He was working mainly in France.

Here I have a Disc dancer signed Derenne.....I have misplaced the discs that go onto both hands unfortunately. Though it is not taking away the movement in the piece. Made of green patinated spelter on a Belgium slate base. I sold this piece over ten years ago and have recently acquired it back. She is 20 inches high almost dancing off the base. 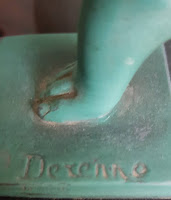 Born in Pontoise France largely self taught. He was taken prisoner during the Fiirst World War and sent to Switzerland. He was active until 1935 exhibiting at The Paris Salons. He designed for Argy-Rosseau who was a magician in Pate-sur-Verre.

He preferred a classical theme. his Art Deco sculpture of Amazon with shield and spear has become a regular on the auction market.

He may have also used the pseudonym Briand as there is a definitive connection between the two.

Bouraine studied with Pierre Le Faguays and Max Le Verrier at The Ecole Des Beaux Arts in Geneva. Max Le Verrier would later cast many of his sculptures for him.

Posted by Wayne Colquhoun at 12:59