Its an age since I purchased this Art Nouveau Corner cabinet in the South of France at a trade fair. 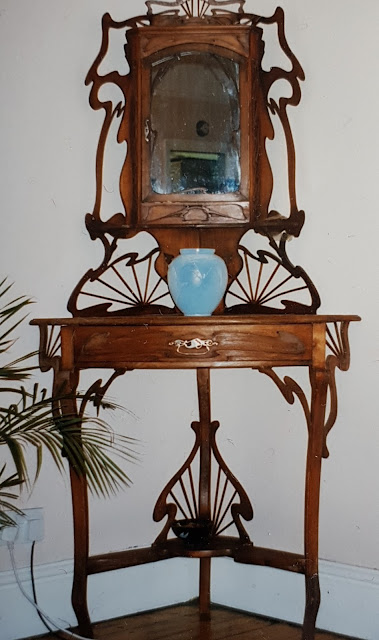 Its fragile alright. The work that has gone into it is unbelievable.
The fretwork is so delicate in places that I dared not move it for ages.
So it stayed under the stairs at my previous address for so long that I forgot about it.
When moving house a few more pieces become loose but it was all there.
So I got my tools out and restored it.
I had kept all the bits and put them in the drawer, so it was just a case of regluing them back into place.
I felt guilty that I had forgotten about this amazing piece of Art Nouveau that has a look of Henry Van de Velde, a hint of Guimard but is probally school of Nancy if the location in which I bought it is any indication.
I remembered when I purchased it, right as it came Au Cul Du Camion....right out the back of a wagon within five minutes of the start of the market.
I grabbed it.
Dealers fell all over it but I had hold of it tight, I was not going to let it go and the guy who owned it did a deal, looking bewildered with all the excitement it had generated, thinking he had undersold it, which he had. Two guys asked me if I wanted to sell it and how much I paid for it right away.

It breaks down into two parts and when I was carrying it back to the van an Italian bloke tried to buy it off me.
"Style Liberty, Style Liberty" he kept saying. 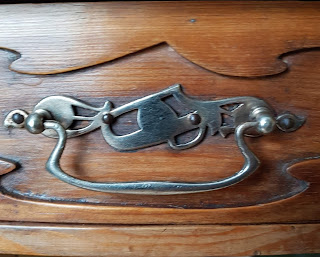 The Italian call Art Nouveau, Style Liberty after the shop in Regent Street opened by Arthur Lazenby Liberty. I refused and eventually I wound my way back up to the North West of England with it rattling about worrying me every time I turned a corner. There it remained for a decade or more.
It dried out a bit, as it would, so I had to reglue the joints. Its times like this that my apprenticeship training comes in really handy. It is made of two different woods the carcasse of it being a softwood and most of the fretwork edges are made of oak so they are stronger and easier to carve.
This detailed restoration was needed when I bought it and considering its over a hundred years old its done well to last.
But with all the work now carried out and a coat of wax its now looking great.
But now.............................. 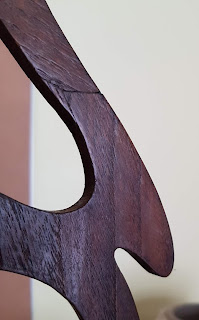 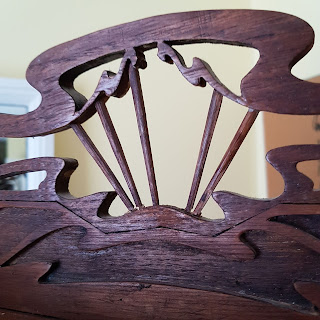 I dont want to move it again.
I wonder how long it will sit in the corner for this time.
Well I can think of worse things to have in the corner of your room.

Posted by Wayne Colquhoun at 13:36