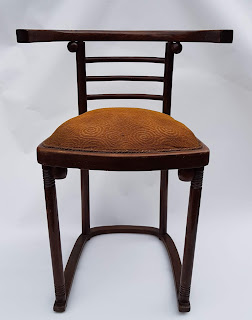 Stained Beech Bent and solid wood frame. Turned legs.
This is a chair with balls.
Designed 1905-08 by Joseph Hoffman for the cafe at the  Caberet Fledermaus which opened in October 1907 in Vienna  .

Its wickedly simple construction makes this chair, one of the most influential designs of the early 20th century.

Noted as model no 728 in J & J Kohns furniture catalogue.

It is hard to now believe that this piece of early modernism was made during the Art Nouveau and Arts and Crafts period. One Hundred years ago.
Its simple construction lends it to mass production, something that both Thonet and Jacob and Joseph Kohn were the predominant manufacturers of.
They were always on the look out for interesting shapes and at the time of putting this chair into production and were largely responsible for making affordable furniture for the masses. 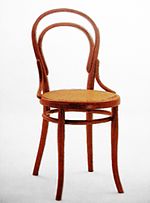 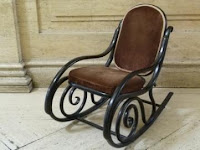 Gerbruder Thonet had put into production Model no14 in 1859. This chair is still in production today.
I have sold several Model no 1 which was manufactured in 1866 and this rocking chair still seems worthy of a trendy loft apartment today originally manufactured with its woven cane seat and back into its solid and bentwood frame. 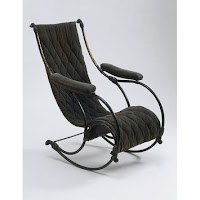 Chair design also owes a debt of gratitude to the wrought iron semi cantilevered chair that was shown at the great exhibition of 1851. Thought to have been designed by R.W. Winfield & Co it still has a deep buttoned upholstery seat and arm pads that sat on a slatted frame.
This was being produced, in a slightly altered guise in Germany by L & C Arnold and it must have influenced many. 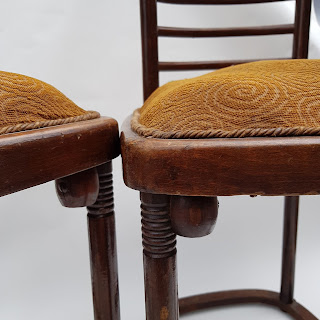 The construction of chairs was altered by fashion and at the turn of the 20th century simplicity was required in certain circles and this was a democratisation of furniture bringing simple style into the homes of many.
While Louis Majorelle and Galle were making works of art in solid mahogany with gilt mounts and exhibiting them to an international audience. The quiet revolution was taking place.
When Marcel Beuer designed B33 in 1927 made from tubular steel with a simple leather seat it was manufactured by the progressive company Gebruder Thonet in Frankenberg from 1929.
It is still being manufactured today.
Would there have been a Bauhaus without Joseph Hoffman? Probably not.
Palais Stoclet designed by Hoffman was a turning point in architecture for many.
Hoffman met Charles Rennie MacKintosh in 1902 and the combustion of ideas from two continents certainly fuelled the fire in the bellies of the Wiener Werkstatte of Vienna. Hailed as a genius by the Viennese. MacKintosh would die largely a forgotten man in his own country but be held as a everlasting beacon of hope in Europe. 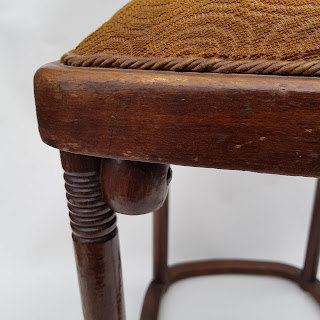 The Die Fledermaus chair was originally painted white and these original chairs now command a kings ransom but this version is shown in a 1916 sales catalogue for J& J Kohn as model no 728.
This is a chair with balls.
Something that along with the chequer board motif was Hoffmans trade mark.
He would come to be know as square Hoffman.
And it works in all its variations of the theme its simple decoration, less is more is now proving ever more popular with a new generation who seem to have abandoned the past, wanting it only in limited quantities. 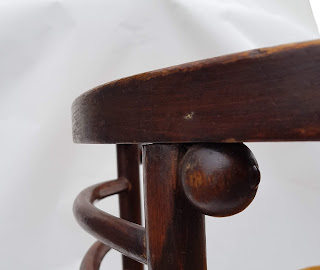 This chair, one of a pair has an original label underneath that says THONET MUNDUS. Mundus were a manufacturer and merged with  J & J Kohn in 1914 to furnish the growing sales of the company.
Thonet merged with Mundus in 1921
The original fabric is very interesting it appears to be a design that Gustav Klimt could have done, or was it a general swirl that he adopted from what was around him. Klimt was an original member of the Weimer Werkstatte.
This design has now taken on legendary status.
When you say museum quality.
I sold a exacting pair to The Walker art Gallery along with a side table some time ago.
I held this pair back.

Its now time to let them go and let someone else have the pleasure of them. 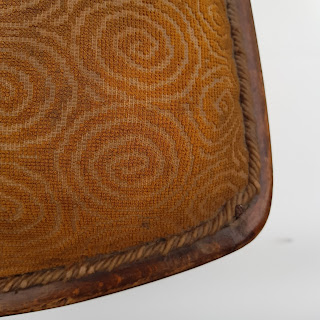 The pair are in original condition bearing Thonet Mundus-Borlova labels to the underside. 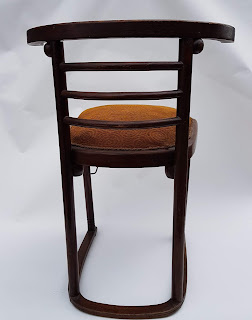 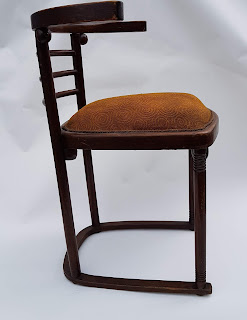 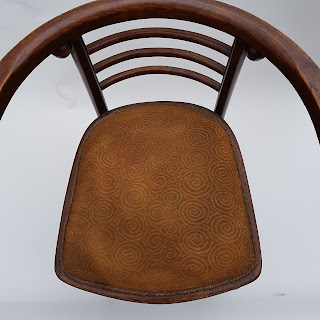 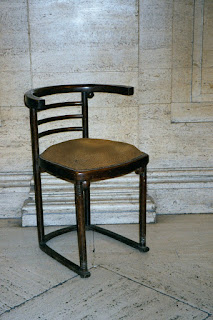 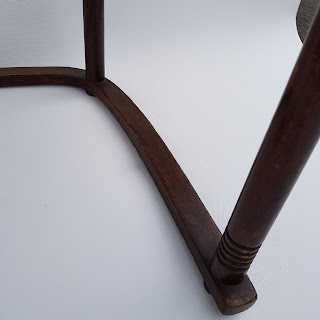 Posted by Wayne Colquhoun at 15:33