Tiffany Favrile Bowl-Piece of the Week. 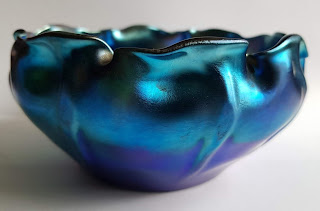 He was a gifted painter in his younger years.
He was also an architect,designed furniture, textiles, wallpaper and rugs. He worked in Bronze, silver, wrought iron, wood ceramics and silver.
But he is mostly known for glass.
“I have always striven to fix beauty in wood or stone, or glass or pottery, in oil or watercolour, by using whatever seemed fittest for the expression of beauty; and I see no reason to change it.”
He expressly refrained from imitating by striving for a new medium.
“God has given us our talents not to copy the talents of others, but rather to use our brains and our imagination in order to obtain the revelation of true beauty.”
He searched also for new technical inventions that could help him with his restless ideas. 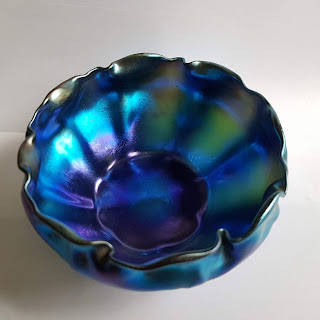 The son of Harriet and Charles Lewis Tiffany, New York. He was the founder of Tiffany & Co a purveyor of jewelry silver objects and timepieces.
That name had become a byword for luxury and craftsmanship. Opening in 1837 by the 1870's his Fifth Avenue store became the place where presidents would buy gifts for royalty and heads of state. By 1900 they had 1,000 employees around the world.
Louis showed no interest in joining the family firm instead he went to Eagleswood Military Academy in Perth Amboy, New Jersey.
In 1865 he toured Europe.
While in London he visited the Victoria and Albert Museum and the Roman and Syrian glass made a monumental impression on him.
This same museum now has a collection of Tiffany Glass.
On return to New York he enrolled in the National academy of Design and exhibited, in 1867 paintings that were inspired by his European travels.
He worked alongside George Innes (1825-1895). He was part of The Hudson River School.
They both enjoyed a love of nature.
Innes had a dialogue with the Babizon school of painters who worked near Fontenbleau.
Tiffany went back to Europe in 1868 where he met Leon-Charles-Adrien but could not work within his strict regime. He then met Leon-Adolphe-Auguste Belly (1827-1877) who was a painter in the exotic and orientalist style and exhibited at the Salon.
On return to New York he met Samuel Colman at the Century Club.
While travelling separately they met in Granada and decided to travel on to Egypt and Africa together.
Morocco, Tangier where he painted the Souks. then to Tunisia and Egypt they often painted the same subjects.
He began to love Islamic art and started collecting glassware and other objects. These pieces would lead to later inspiration. He took photographs and would use these later to recall his influences.
1878 would see him exhibiting street scenes of New York at the Paris Exhibition Universalle of 1878.
He received many awards and showing his work at 27 different exhibitions by the age of 21.
He formed the society of American Artists along with John Singer Sargent and James McNeil Whistler. He realised his lack of classical training would always hinder him and his vast wealth gave him the opportunity to follow a avenue less crowded where those with more skills would outshine him.
His works of this period is now valued for its skill and approach and highly valued.
His acquired sense of colour and his experiences would lead him into creating glass.

Industrialisation would give new opportunities and the demand for luxury items to fulfil the ambitions of the new rich industrialists led him to draw on his fathers reputation.
He formed a Interior design company that lasted for four years. He would encompass many variations of design and was inspired by the Arts and Crafts movement and in particular William Morris who was enlightening the world to medieval design and craftsmanship.
Art Nouveau, was the breath of fresh air that filled his lungs.
Tiffany would be inspired by art nouveau and its principle designers but would look to nature for his own special style. In 1882 he had received a commission from President Arthur who was a New Yorker to redecorate the Whitehouse where he would install a three part glass screen to separate the public and private areas.
Twenty years later Theodore Roosevelt would remodel the Whitehouse again. This time in a Neo-Classical style.
He and his associates decorated houses for some of the most wealthy people including Andrew Carnegie Cornellius Vanderbilt II and the writer Mark Twain. He split with his associates in 1883 and was free to explore his own independent projects. 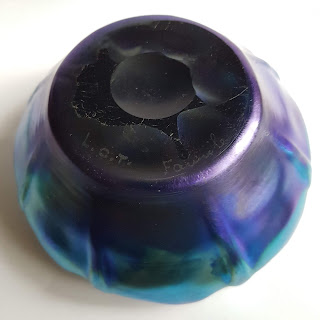 He loved old glass and the way minerals in the soil had effected the glass when buried for ages. Glass that dated back to 1450 BC from Egypt was often thought as the earliest and Syrian glass blowing using a hollow pipe was invented in the 1st century B.C. Glass is mentioned alongside gold and precious stones in the bible as a precious commodity.
In the mentioning these treasures, only glass is made by hand.
Tiffany would go on to form a reputation that has not been equalled.
This small bowl infused with blue and greens is only 5inches wide. But a object of exceptional beauty.

This piece is no longer available Sorry.

Posted by Wayne Colquhoun at 16:04