UNESCO have now decided that the city of Liverpool does not understand the concept of looking after its best asset, it's World Heritage Site. They meet this week to discuss whether Liverpool should be removed from the World Heritage list.
They have asked repeatedly that Liverpool provide them with provisions of how to manage its world heritage site.
No such undertakings have been received.
The United Nations cultural arm have expected a city that has a world heritage site would have people in place who would understand its cultural significance in terms of world importance and they would protect it against planning blight, and we get Joe Anderson, before him Mike Storey and in between the both of them Warren Bradley.
Unesco World Heritage Committee meet in Krakow high on the agenda is Liverpool.

Liverpool To Lose UNESCO World Heritage Site Status In 2018. Its Official.
In view of the above analysis, it is recommended that the Committee expresses its deep concern that the projects already approved as well as those approved in outline have actual and potential highly adverse and irreversible impacts on the OUV of the property.
Therefore, it is also recommended that the Committee retain the property on the List of World Heritage in Danger but consider its deletion from the World Heritage List at its 42nd session in 2018, if the State Party does not reverse course and stop the granting of planning permissions which have a negative impact on the OUV of the property, provide substantive commitments to limitation on the quantity, location and size of allowable built form, link the strategic city development vision to a regulatory planning document, and lastly provide a DSOCR and corrective measures that could be considered for adoption by the Committee. 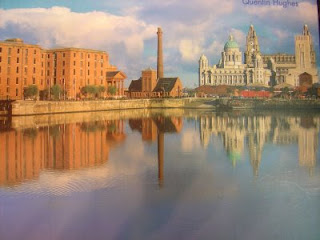 I have been forced to watch as my cherished views have been destroyed by these consecutive city council leaders who seem blind to seeing what I used to be able to see, my history, my culture.
Both pictures here are of the same view before and after note the cupola of the Port of Liverpool Building...now obscured. 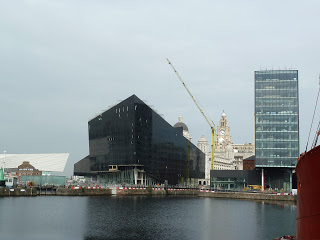 For over ten years now I have been campaigning vigorously to stop the continual erosion of the majesty that once was Liverpool.
They have taken away my pride.
They have stolen it from me.
I have fought hard, really I have fought hard but the power that these people possess has surprised even me.
Civic vandalism is too tame a description of the sheer destruction of the soul of the city that in places has been stripped bare of all historic meaning.
Capital of Culture became Culture of Capital.
It was easy to pull the wool over the eyes of a lazy electorate.
Yes strong words but true.
Shame on all those who could see what was happening, but did nothing, often as with the guardians of our museums they had the brains........but were in on it. They destroyed Manchester Dock which pre-dated The Albert Dock by 60 years......to build a new museum.
The directors and curators busy making their names and furthering their own careers.
Yes you at Liverpool Museums you know who you are.
There were others who also had opinions.
See Ptolemy Dean video describing on a programme entitled Britain's Vanishing Views.
I don't claim easily that the brain drain that happened in Liverpool in the 1960's has left us with a foolish breed of poorly educated architects without morals. But its true.
So what of these architects of disaster who sold themselves short for wages. Sold, well our soul really.
And of English Heritage whose ill conceived Chairmen such as Sir Neil Cossons and consecutive Chief Executives have to share most of the blame, allowing their operatives to be in on the deals.
I met with two Unesco reactive monitoring missions and asked Ron Van Oers of Unesco face to face, “Why did you allow them to destroy the Pier Head”
“With English Heritage supporting the developments there was nothing we could do”, was his reply.
Now we can't expect people from The United Nations to save a city from itself or understand the way Liverpool's forever corrupted regimes work the planning system.
Its really not their fault the blame lies elsewhere.
You cant blame the barometer for the weather.
There are third world country World Heritage Sites to look after, surely they can't believe that a country such as the UK, as member of the G7 would behave like the Taliban in destroying its own heritage sites.
Though instead of blowing them up with TNT they destroy them with planning blight.
Some historic buildings, listed, now look alien in their own environment because of what was allowed to be built around them.
Liverpool was placed on the Unesco 'World Heritage In Danger' List at the same World Heritage Committee meeting that saw Aleppo and the Palmyra Temple added, that was subsequently blown up by ISIS.
I feel like I have wasted so much time now, but for years I have been fighting for Liverpool's historic buildings, fighting against the odds, with planners, turning up to argue at planning committee meetings in my own time, those committees that had carefully politically placed members who had already taken the decision to pass the very plans that have now done the damage, thus denying me and other objectors, a democracy of fairness.
It's as if those with the power are walking round with welders goggles on, oblivious to the beauty that the forebears had left us, unable to see. Or are taking liberties for their own gain, they have just let it happen.
Frustration has become a way of life for me.
But now, Liverpool having been on the Unesco register for quite some time, it appears that we are at the last chance saloon, before we as a city, lose the title of World Heritage Site.
How can so many be let down by so few.
UPDATE 12.1.2022
LIVERPOOL HAS NOW LOST ITS WORLD HERITAGE SITE STATUS
THE MAYOR JOE ANDERSON AND OTHERS HAS BEEN ARRESTED ON FRAUD AND BRIBERY CHARGES AND ARE AWAITING CHARGE.
LIVERPOOL-THE CITY THAT GETS WORLD HERITAGE SITE STATUS AND THEN GIVES IT AWAY.

Posted by Wayne Colquhoun at 11:10