This time I had a bit of notice that the BBC was coming in to film the Antiques Road Trip. It was the day before I was told that it would be Charles Hanson. I had better tack all my stock down I had said to one of the crew laughing. He is the bloke who seems all over the place. Bull in a China shop and all that stuff. 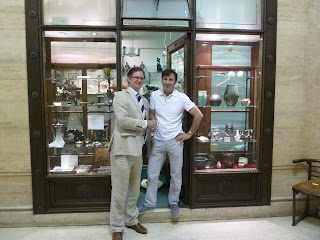 They were not too late about an hour, the same amount of time they gave me to prepare last time when Edwina Curry popped in...or out, we will have to see how they edit it. http://waynecolquhoun.blogspot.co.uk/2013/05/celebrity-antique-roadtrip-drop-in-to.html
They had parked Charles Hawtree……err I mean Charles Hanson's car in the garage below the shop and we went into filming.

It was an unusually sunny day and Charles turned up looking like an mad English Colonial Gentleman from the 18th century with a floppy Panama hat and a beige suit on, err, just playing himself really.

He was off “Well Hello Wayne, what a shop I wish I hadn’t spent all my money I love it”
Here we go I waited for the punchline. He then ruined my day by saying he had the grand sum of 25 quid to spend. This is going to be the hardest 25 pounds I have ever earned I thought.

But in with the spirit of the programme I tried my hardest to make a sale and I suggested a few bits. I tried to tempt him with an 18century jug with a frog and a newt inside and this of course lined him up for all the jokes about being drunk as a newt and gave him time to show what he knew. Two minutes.

I had suggested he bought a Sabino Turkey or in french a Dindan he was off dindon, dindan dindan, dingdong he sang. I called it a Turkey after that but he wouldn’t stop he just kept going on and on, he is mad.

I even offered to throw in one of my spectacle holders that I make. He went for it. 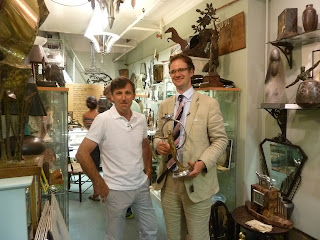 “That’s so kind Wayne” aiming himself at the camera he was off again this may be one for the future viewers, when Wayne becomes famous and is known for his work this could be worth a fortune”
I got a bit embarrassed.


“Yes when I cut my ear off,” I said trying to play it down and make a lighthearted joke about it.


“Yes like Picasso” he said with a confidence that showed he knew what he was talking about.


The crew were having a laugh behind the cameras I just decided to have a bit of fun and wind him up a bit, but it seems there isn’t much winding required he is an off beat character.


He started whispering to the camera about getting me down to £24 and I just threw in the Sabino Dindan and the Dali-esque spectacle holder for £20.


I would not wish the next shop you go to go through what I had gone through for a quid. 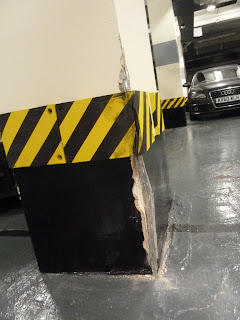 Or even a fiver for that matter but that’s life.

If he had of hung on a bit I would have given him the piece for free if he promised he would go.

Jokes aside it was good fun and it seemed to go quite well The crew had a right laugh as did I, and I look forward to seeing the programme which could be anytime.


“Yes I replied, “Go out the front take a left go ahead where you will come to the Pier Head, and then…keep going”

He left a little calling card in our garage, he hit one of the stanchions, only superficial damage but lucky for me it wasn’t in the shop.

Not sure when the programme  will go out, on air, but it should be funny.
I don't think they filmed him wrecking the place. When the security told me he had hit a stanchion I had this image of him bringing the floor above down. Lucky it was not that serious. Ding Dong.

Posted by Wayne Colquhoun at 11:44