My Shop Gets A Mention In Private Eye 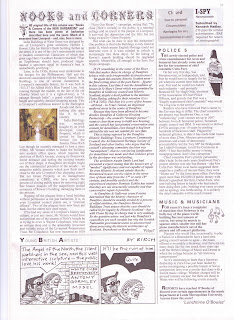 India Building has not been managed too well through the recession and the far reaching tentacles of Private Eye and in particular our friend 'Piloti' in the NOOKS AND CORNERS section does like to keep up to speed with whats happening in Liverpool.
Both myself and other concerned shopkeepers staged a protest to send a clear message to the owners Green Property that this is more than a investment for them they have a responsibility to people of Liverpool who have a huge amount of emotional attachment to the Historic India Buildings.
The shopkeepers in Holts Arcade have suffered from a lack of footfall and it has even had an impact on what I do, thanks to the Internet I have managed to keep sailing through, but I have tried to help my neighbour in the newsagents after he was told they wanted to close access to the public.
The strange coincidence that several bronze architectural fitments were illegally removed by the owners of this Grade II listed (hopefully soon to be upgraded to GradeII*) building.
click on pic to enlarge

This threw the wrath of the local press and especially Peter Elson the Liverpool Echo Shipping Correspondent, upon Green Property and its strange and illegal behaviour.
Allowing a building to deteriorate is not something they should now consider as an option after the people of Liverpool have sent a clear message to them and 1000 names have been collected on a petition to be delivered to the city council.
Holts Arcade was in fact built on Chorley Street and has been a public right of way for over a century.
It would be really foolish for Green to consider closing it and denying the public access.
Here is a bit of the recent activity.
CBRE Liverpool and in particular John Lee the area manager of CBRE who may I say in my opinion, has ruined the whole ecosystem of a building that was, only, 10 years ago operating with 3500 people, but he saw off so many with such a bad style of management that it is now a building with about 400.
There is no coincidence that this, in my opinion, arrogant man set about bringing in a style that scared more people off.
CBRE and Mr Lee are the last people I would employ to manage a historic building and that is without even mentioning his hopeless lapdog Paul Jolley who was appointed by him to manage, just below him, and was so out of his depth that he had to walk around with a snorkel on.

Here are some recent press reports It made the front page of the Daily Post and pages in nthe Liverpool Echo
http://www.liverpooldailypost.co.uk/liverpool-news/regional-news/2012/11/22/future-of-india-buildings-in-doubt-after-liverpool-council-cautions-owners-over-illegal-removing-of-entrance-plaques-99623-32280635/

Green then appointed Dougal Paver to try and get them out of the mess
http://www.liverpoolecho.co.uk/liverpool-news/local-news/2012/11/23/u-turn-on-blunder-at-liverpool-s-india-buildings-100252-32290010/
But we have heard it all before several years ago John Lee used the building to promote himself.

Recent history has not been good for India Buildings.

Some saw this coming http://condensedthoughts.blogspot.co.uk/2012/09/answers-needed-over-india-buildings.html

http://www.liverpoolecho.co.uk/liverpool-news/local-news/2012/12/04/sit-in-to-save-liverpool-arcade-100252-32355765/
This was taken up as a news item and several featured spots on Radio Merseyside, but it is so important, the plight of one of Liverpools Historic buildings, that it has got to London and the satirical magazine of Private Eye. Well done 'Piloti'

I have just about managed to hold on to my pride in this magnificent structure where I spend a lot of my time and I hope this episode can now be put behind us and we can now work towards a future that respects the history and the past of the beautiful Travertine Marble Holts Arcade within the beautiful majesty of India Buildings.