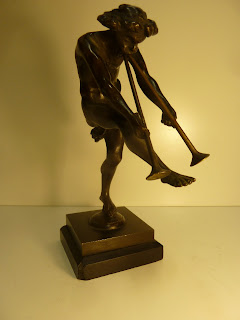 Jean Bulio was born in Fabregues in 1827 in the Herault region, South of France.
It was Montpellier where he died in 1911.
He left behind a good body of work including a bust of Napoleon.
His work had titles such as Venus and Cupid.

His style was mainly classical which is hardly surprising when he had enrolled at the Ecole des Beaux Arts in 1859. He exhibited a plaster cast that year of Pandora.
In 1882 and also 1886 he received honorable mentions.

This bronze is unsigned and is only small, being 17cm high but large enough to make it tactile and want to hold it in the hand as many have done before showing a little rubbing at the touch spots allowing a slightly more golden colour to bleed through.

The patina is nice though. It has that chocolate brown colour that almost makes it good enough to eat. 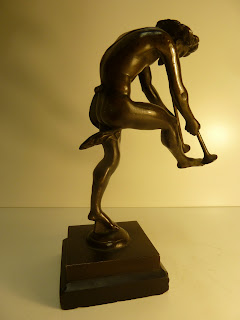 At first glance it looks slightly to one angle but to those with a detailed eye will see that is because the sculptor has made the piece that way. It is as if the player of the pan pipes is just about to leap on to his other foot.
That time where it is most difficult to see and ambitious to create.
He has puffed out his cheeks ready to blow.

Jean Bulio has gone out of his way and decided to make his piece showing that he understands movement along with anatomy. 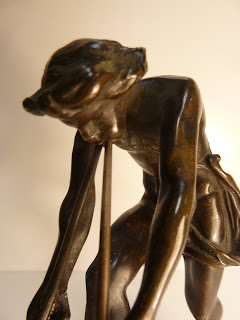 The The Pan Pipe player is draped in a wrap around his torso just enough to give it the feel of plein air, a feeling that the subject being outside and taking part in some form of celebration or maybe even a procession.
He looks Greek and the pipes are often associated with classical Greece. His hair is blowing in the breeze.
He is not a Hercules or a strong man, just a simple musician.
This is a careful study.
I have the same piece in my own collection on a different coloured base. I have had him for fifteen years and have never been able to part with it. Mine is African red marble. 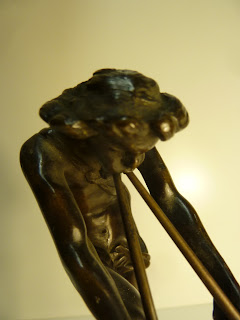 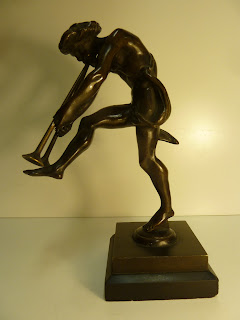 
See my sculpture section of my website for this and others of a similar style and period.
See More Here

Posted by Wayne Colquhoun at 11:59