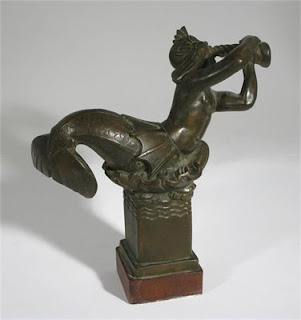 I bought this bronze by Herbert Tyson Smith in an auction hundreds of miles away.
The Internet now dictates there is nothing local anymore.


But this really is a local artefact, and I had to have it, and paid a bit for it, but I must bring it home I thought..

It is a study of a Merman. Images of Mermen are all around this locality around Water Street and the town centre.


There is n almost identical depiction on the façade of Martins Bank Building across the road from my shop.
It is signed in the bronze and sits on an exotic marble base.
It seems to my mind to be a limited casting; I would be surprised if there was more than one made. Herbert Tyson Smith had been very productive in the inter war years.

He was the man who created the bronze castings on the Cenotaph on the space directly in front of the entrance to St Georges Hall along with architect Lionel Buddon. 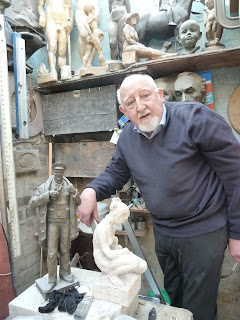 Look up at most stone carvings from that interwar period and there is a chance that they were done in his workshop.


There was a little bit of research to do but I can take my time I thought but shortly after me picking it up Terry McDonald a local sculptor who seems to have been around forever, dropped in the shop.


Of course he used to work for Tyson Smith so I showed him an image of the bronze.

” Oh yes I remember that....... I broke the full sized plaster model of that same piece up, after the war, It was going to be a fountain, there was no money around for it”

“Positive I was only a young bloke then but I remember it as if it was yesterday” he replied
pic; by Wayne Colquhoun; Terry McDonald at his workshop 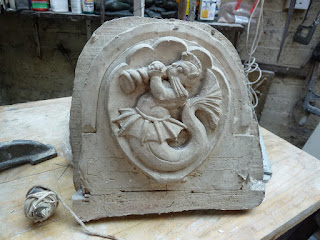 I went around to Terry’s place and there you go, original pieces by Herbert Tyson Smith with the same themes and much more. His workshop was fascinating.
Here he is pictured with a model for the huge bronze that he was commissioned for that was erected outside Liverpool Womens Hospital.

I had been a member of the Liver Sketching Club at one time and I spent numerous Saturday mornings sitting by an easel drawing from life while Terry held court strutting around the circle of budding artists giving advice in a parental manner.

It was a bit too much for me and I refused his help but remembered the experience of the Saturdays spent in Seal Street with a group of older blokes who were dedicated to thier art.
Tyson Smith had his workshops at the Bluecoat and I made an application to have a separate listing within the English Heritage listing of his studio at the Bluecoat in School Lane.

Those English Heritics saw it a more fitting proposition to knock it down.

What a tourist attraction this would now make but instead http://www.liverpoolmonuments.co.uk/tyson/workshop06.htm  it is now a shop selling cheap Chinese imports that do nothing to evoke the history of that area.


He sculpted reliefs for "The Crown" a hotel and public house on the East Lancashire Road http://www.liverpoolmonuments.co.uk/sculpture/crown01.html  that in an act o vadalism was knocked down last year by a bunch of morons and this was allowed by an even larger group of clowns the City Council.


He also did work out of the city this is a monument he erected in Accrington. http://www.liverpoolmonuments.co.uk/tyson/accrington/content/figure01_large.html 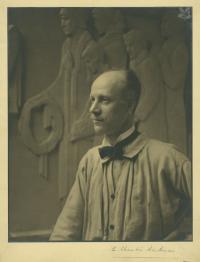 Son of a lithographic printer and engraver, Herbert Tyson Smith was Liverpool born and educated at Liverpool University.

He enrolled in evening classes at the college of art where he studies clay modelling, plaster casting and stone carving.

He also studies drawing under Augustus John at the "Art Sheds" and University School of Art where he met Charles Allen, head of sculpture.

He joined the Royal Engineers at the outbreak of war in 1914 and was stationed at Dymchurch, Kent.

Honorary instructor in Craftsmanship at Liverpool University School of Architecture.

Posted by Wayne Colquhoun at 13:22