Art Deco Panther-Piece of the Week 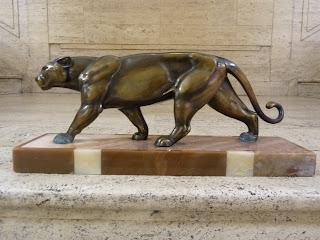 I love the way the French depicted animals in the inter war years, with their tradition of sculptors in the genre.
The noble beast lends itself to a stylised study and in the hands of a good sculptor it is amazing what can be done.
I have chosen a picture of one I currently have that is not too expensive, £300-400 would be a decent price to pay for such.
It is a spelter model, but the base is nice marble and the way it has been inlaid with sections of onyx just gives it a  little extra.
It has a bronze patina and this is everything when purchasing a spelter as a beautiful glow can hint that it is a bronze to most people.
Where do you go with the same equivalent in bronze well its going to set you back a thousand pounds and if it was by my favourite sculptor Rembrandt Bugatti, son of the furniture maker and brother of the car designer then you may be looking at half a million pounds.
This is a nice way to "buy in" to he at deco style. It may be said it is a touch on the masculine style but having sold scores of Art Deco Cats to ladies it seems that the beauty transcends the sexes.
I don't know anyone could deny the beauty of a strident black leopard stalking its prey or just strident as in this pose.
Tradition:
Le Livre du Jungle  http://fr.wikipedia.org/wiki/Le_Livre_de_la_jungle that was published in France, or as we know it here Jungle Book by Rudyard Kipling.
This animalier style was championed at the Salons and was maybe the continuation of a tradition that Antoine Louis Barye http://en.wikipedia.org/wiki/Antoine-Louis_Barye came from in the 19th century.

So you may wonder what a cartoon in the sixties with songs such as the Bear necessities and lyrics such as "I wanna be like you..u..u, dooby doo, dooby doo, have got to do with this sculpture.
Well its my opinion that it is because Le Livre Du Jungle was illustrated by Paul Jouve with his beautiful stylised and characterful depictions of the beasts that Kipling made come to life from his memories in India, and this helped to inspire a generation of artists and sculptors that helped form the vision that made the cartoon come alive. To another generation. It does not disredit Paul Jouve t know that his amazing illustrations of Mowgli  lit up the eyes of Walt Disney for sure.
How now we take it for granted, we know almost every creature that has ever existed, but in the 1920's  you may not know what a Lion or a Tiger looked like.
These exotic creatures were to mesmerise a generation with a novel such as Edgar Rice Burroughs Tarzan of the Jungle, (it seems like only yesterday, watching the Johnny Weissmuller and seeing the 1960s cartoon on the flics).

Today these artists and sculptors from a tradition of craftsmanship that could not be recreated today, leave an affordable and stylistic legacy to a almost forgotten era.


But in the twenties and thirties you could discover their magnificence only in a zoo, but a sculpture could then be purchased in a posh department store and be placed be pride of place on your mantelpiece..............just as you can today.
Posted by Wayne Colquhoun at 11:54

Email ThisBlogThis!Share to TwitterShare to FacebookShare to Pinterest
Labels: Art Deco, Piece of the Week.