Pair of Chairs by George Montague Ellwood-Piece Of The Week 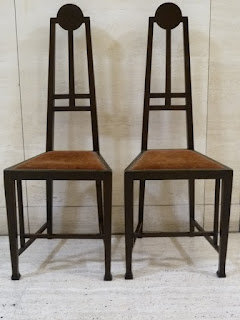 A pair of exceptional Arts & Crafts side chairs designed by George Montague Ellwood & made by J S Henry.
The single central back splat united by two lower cross stretchers which cleverly emulate the lower twin side stretchers & single side uprights which are united by a higher single cross stretcher with its roundel.
A single variation to this chair with copper inlay sold at Sotheby's London on 22nd Feb 2006, it made £5040 with the buyer's premium that chair was almost identical in form. 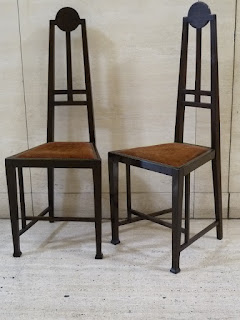 George Montague Ellwood (1875-1955) Artist, Designer & Interior Decorator was educated at Holloway Art School & later studied in Paris, Berlin, Dresden & Vienna & at Camden School of Art from 1916 to 1924. In 1897 he won the gold medal for his furniture designs at the National Competition, South Kensington. He was one of the founding members of the 'Guild of Art Craftsmen', comprising the likes of Onslow Whiting (metal & repousse' work) J Osmond (a carver), & Richard Garbe (sculptor).They held regular exhibitions of their works, situated at Camden Square, London.
Some of Ellwood's best work was between 1900-1905/6 when he was the head designer for J S Henry (John Sollie Henry, founded c1880) of Old Street, London.
Ellwood knew how to strengthen a piece of furniture yet retain a lightness of touch that is still surprising in its vision, today.
The simple addition of the upright that connects to an additional internal stretcher gives the chair an architectural strength, yet manages to give the chair an air of lightness.
All this extra work adding to the integral strength in such a way that he was able to create modernism in a Victorian age.
Other designers such as C F A Voysey, W J Neatby, G Walton, W A S Benson, & E G Punnett whom also supplied designs for J S Henry were tryng hard to encapsulate the same vision. 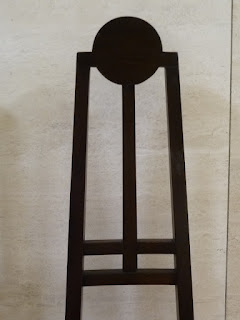 J S Henry made furniture to their designs in oak, walnut, green stained sycamore & mahogany, often inlaid with fruitwood, pewter & copper depicting stylistic & organic designs. Ellwood's designs for J S Henry were exhibited at the 1900 Paris Exhibition & won a silver medal. He exhibited at a number of venues between 1899 & 1915, including four times at the Royal Academy. He also worked for Bath Cabinetmakers & the Bristol based firm of Trapnell & Gane. Later he traded as Ellwood & Sledmere at 53 Mortimer Street, London. & designed posters for the London Underground Group between 1912 & 1914 now displayed at The Transport Museum.
He became editor of Drawing & Design Journal & in later years continuing his life's work he wrote several books on drawing & design.
Posted by Wayne Colquhoun at 14:45

Email ThisBlogThis!Share to TwitterShare to FacebookShare to Pinterest
Labels: Art Nouveau, Arts and Crafts, Piece of the Week.